skip to main | skip to sidebar

I have a long association with Japan, starting in 1971-72 when I was a student in Tokyo at Waseda University's International Division.  When I returned to the US and Hope College (Holland MI) as a senior, I met my future husband who had been born and raised in Tokyo.  His mother, now at 94 and almost 95 on November 2, is still lively just very, very hard of hearing.

I have been fascinated with nature and the world of trees, leaves, flowers, insects (as long as they're outside, not in my home) and clouds.  In other words, the biosphere or the environment and our place in it.

Leaves, especially, have a large part in my artwork as seen in my Square Headed Women and the Flower Packet Folding Books I've made.

I had pruned a volunteer Red Twig Dogwood in my terraced garden behind my house one autumn after the leaves had fallen.  They looked so fascinating that I stored them in my garage during the winter.  I realized that was an excellent decision to have made because it gave the twigs time to shrink.  I've just cut more, even though it's still warm weather with leaves on the trees, but I may have to use some of the twigs soon, as I will explain.

My first attempt at using the osier twigs was in 2014 on a doll that I felt exemplified my feelings about winter:  cold, brittle, white and gray, but with the beauty of some of nature shining through, such as the osier twigs.  I made 3-piece and 4-piece twig frames bound together with dark red thread and piled down and around the figure.  Unfortunately when ever I was at a show in which this piece was displayed, there were always broken frames; or I'd get the piece back with numerous broken frames in the box....

So I took the twig frames off the figure and have looked at them for a number of years trying to figure out how to use them.

In the meantime, I visited my mother-in-law last October (see all of my Postcards from Japan from Oct. 12-Nov. 9, 2016 in this blog).  Before and after this trip, I visited Kanji-A-Day daily to study so I can read friends' letters, magazines and more.  I love Japanese and Chinese calligraphy and kanji.  In fact, that's probably one of the major reasons I decided I wanted to go to Japan to study.  But there are some really odd and weird looking kanji such as:  鼠 mouse,  卵 egg 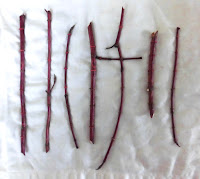 I started playing with the broken pieces and realized they made some very odd shapes that looked rather like kanji to me.  These developed into the above Scroll #2: Strange Kanji.  I had made a previous one, my first attempt at making a Japanese scroll, using Japanese postage stamps and kimono/obi fabric.

So, my current project is working on individual fabric wrapped rectangles that have twigs couched down to form my own imagined kanji.  These so far include these three at left.

I'm working on a piece which will have these individual rectangles of kanji placed in a row hanging vertically down the wall.  My vision is wonderful.  I'll see if the final piece is what I imagined! 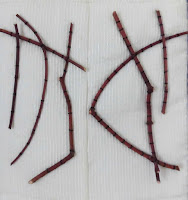 Posted by Jennifer Gould at 9:41 AM 3 comments:


My latest blog follower, Sheryl, reminded me that I hadn't posted anything all summer...  I met her and friend, Pam, at the Holland Area Arts Council this week.  A totally serendipitous meeting as Pam had just been talking about me (my ears weren't burning at all) and the dolls I make.  And then we met!

So I had to show them the dolls that I had with me for show 'n tell at my Lakeshore Fiber Arts Guild meeting that evening at HAAC.  I asked them to help me come up with titles for the dolls because I was really stumped.  Sheryl's suggestions worked for all three.  (I think I added the "Odd" part since they have fins in back and aren't your typical godmother, even a fairy one.)   THANK YOU, SHERYL! 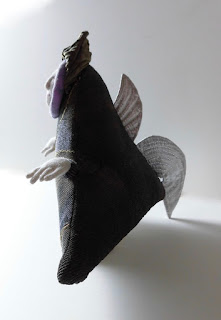 I made the first one in 2014 on a lark, just making a small pyramid doll with some recent hand printed fabric.  The new item was to add feet.  The feet are difficult to make BUT the worst part is attaching them and getting the Faery Godmother to stand.

When I was at the Art House last June for the opening of a show I was in with Boisali Biswas (Confluence:  Fiber Art and Mixed Media--- a fabulous show that we both loved doing together), I saw the card for this upcoming exhibit and immediately thought of this doll and adding another figure or two.

I made two more with one much taller (but still a lot shorter than 12") than the first two, and later decided to have two entries rather than just one with the three figures.

Jennifer Gould
I love fabric and, in my textile pieces, I work to glorify the essence of cloth. I've found that textile figures, or dolls as I call them, satisfy me the most in expressing the form of the human figure. As Federico Fellini said, "All art is autobiographical." Even though a lot of my current work is self-portraiture, what I create today I couldn't have done yesterday because of what I experienced between then and now. Every minute counts.